THE PARIS-LE GRAND INTERCONTINENTAL HOTEL WELCOMES JANTIENA TO PARIS AS SHE TAKES HER VIEWERS ON A TOUR!

In the center of Paris, France, Jantiena takes you to the beautiful and opulent Paris-Le Grand Intercontinental Hotel, a beautifully restored national historic landmark that takes up an entire city block of 470 rooms and will accommodate your every wish! 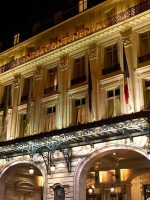 But then, there is Paris, France. And then there is the Intercontinental Hotel Paris-Le Grand.

The Paris-Le Grand Hotel was built originally at Napoleon’s request in 1862 as part of the urban transformation of Paris. Today, this hotel has been newly renovated and remains a national historic landmark that has preserved every aspect of its original opulence.

It has been the temporary home to royalty from around the world as well some of the most famous artists, writers and political figures of our time.

The hotel is an entire city block of 470 luxurious rooms all designed in 19th century French style with every modern accommodations one could possibly expect. Within the hotel is the famous Café de la Paix which has one of the most illustrious terraces in all of Paris.

Centrally located in the heart of Paris, it sits facing the equally opulent Opèra Garnier and is right next door to other famous places such as the Place Vendôme and Louvre Museum.

Surrounded by upscale department stores, shops, restaurants, boutiques, museums and endless streets, all it takes is a few steps to get lost in this land of fantasy and fashion and you’ll find yourself at the Angelina Tea Room which served its first hot chocolate in 1903 or you might find yourself at the Galignani, the old bookstore in Paris, where you can browse through the endless french literature translated into English.

And then there is the Rue des Francs-Bourgeois which is one of the longer streets in Paris that is filled with trendy fashion boutiques in Marais district of Paris; one of the few places you can shop yourself to death even on a Sunday! 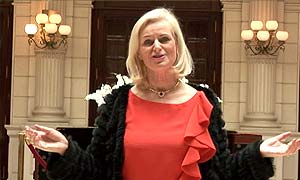 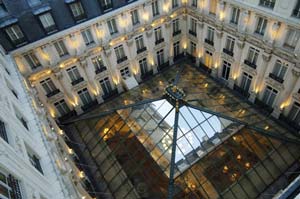 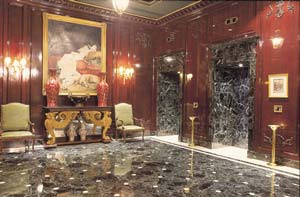 The Paris-Le Grand Hotel has been beautifully restored to its original opulence. 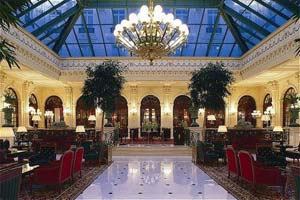 The incredibly luxurious central lobby of the Paris-Le Grand Hotel. 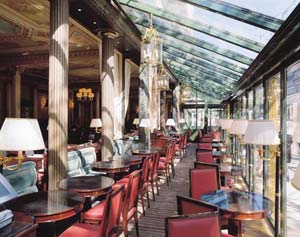 The Paris-Le Grand hotel is beautifully designed for the interaction of natural and interior light. 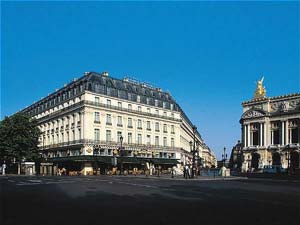 Intercontinental Paris-Le Grand Hotel was originally ordered to be built by Napoleon in 1862.

Nearby the Intercontinental Paris-Le Grand Hotel, Jantiena visits the elegant shops in the historic square known as the Place Vendôme.