Tuscany! A land which lights afire the human perception and brings the imagination into an unprecedented fervor!

Within the heart of Tuscany there is Florence, home to some of the most historically influential people of the arts and sciences:

And now forever a part of this historic culture is the Four Seasons Hotel Firenze!

Seven long years in the making, the Four Seasons Hotel is the result of the laborious restoration of the 15th century Palazzo della Gherardesca and the 16th century Conventino (Convent) with 11 acres of botanical gardens never before opened to the public for over 500 years but always known as the legendary Gardino della Gherardesca.

The Palazzo della Gherardesca was originally commissioned in 1473 by Bartolomeo Scala, chancellor to Florence’s legendary Medici family and was later the home to Cardinal Alessandro de Medici, who eventually became Pope Leo XI. For 500 years this palace was the home to noblemen, princes, the Viceroy of Egypt -and in 1859 was purchased by Count Ugolino della Gherardesca of the della Gherardesca family which owned half of Italy including Sardinia and Corsica.

Come forward now to the 21st century and you now have the property owned by the Fingen Group and fully restored to the Four Seasons Hotel in 2008.

Elegance, beauty and opulence is everywhere, with statues, friezes and hand-painted ceilings with allegorical scenes from the life of the della Gheradesca family being the common experience here.

Nowhere else can public come and live amongst the historical beauty and carefully preserved art that is normally reserved only for museums and galleries.

This hotel is truly a renaissance splendor fully restored to a modern day working hotel with every modern convenience and amenity available to its guests.

Jantiena is currently producing a series of shows which shows the splendor of Tuscany and the area of Florence and the Four Seasons Hotel in Florence is one you don’t want to miss!

For more information on this hotel you may find the following links very informative! 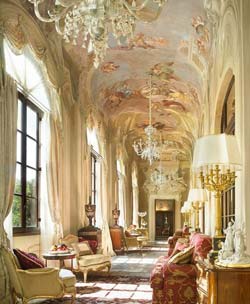 The luxurious Four Seasons Hotel, Florence, Italy with its handpainted ceilings, frescoes, friezes, sculputres and reliefs all throughout the hotel which would normally only be able to be found in a museum. 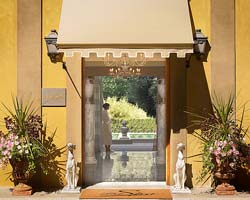 The luxurious Gardino della Gherardesca surrounded by the Four Seasons Hotel Florence which for 500 years was never open to the public. 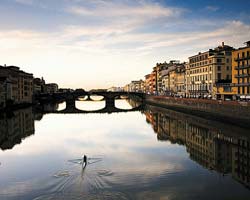 Looking down the Arno River in Florence, Italy

A beautiful view of Florence, Italy. 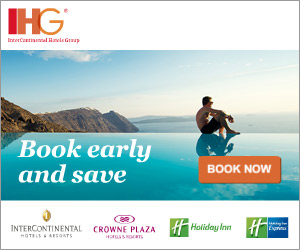