Jantiena Fieyra is the host of the popular new travel-lifestyle-magazine TV program where she travels the world “…to bring Europe to the USA and the USA to Europe.”

In this episode of her TV program series, Jantiena visits the Castle of Miramare along the northern coast of Itlay on the Gulf of Trieste and discovers the romantic story of Archduke Ferdinand Maximillian of Austria and Charlotte of Belgium.

Possibly one of the most endearing and heartfelt love stories of any time period is that of the Archduke Maximillian of Austria and the only daughter of King Leopold I, Princess Charlotte of Belgium.

Along the northern coast of Italy, where the waters of the Adriatic Sea become the Gulf of Trieste, lies the magnificently restored Castle of Miramare that was originally built as a residence-by-the-sea for the Archduke Ferdinand Maximillian of Hapsburg.

Maximillian and his wife, Charlotte of Belgium, came to live in this castle taking up residence on Christmas Eve, 1860. Most of the construction of the castle had been supervised by Maximillian and through is talented design, he had intended to create an intimate atmosphere.

All of the rooms still feature the original furnishings, ornaments, furniture and objects dating back to the middle of the 19th century including the music room where Charlotte used to play the forte piano.

The rooms in the Castle to this day are still mostly arranged according to the original layout decided upon by the royal couple.

However their stay in Trieste at the Miramare Castle was for but 4 short years as Maximillian was eventually despatched to Mexico, where he had been offered the throne in an attempt to end the Civil War there.

Maximillian’s bed, a wedding gift from Pope Pius IX, was never slept in.

Both Maximillian and Charlotte traveled to Mexico and Maximillian proceeded to set up his regime. But as time went on, opposition mounted and Charlotte ended up travelling back to Europe to seek assistance for her husband’s regime; but to no avail.

Charlotte’s efforts having failed, she suffered a deep emotional collapse and before she could ever make it back to Mexico to reunite with her husband, rebel forces eventually captured and killed her husband Maximillian.

Devastated, Charlotte lived the remainder of her life in seclusion, first at Miramare Castle and later in Belgium.

Now, in the late summer months of July and August, one can experience the full tragic love story as it is brought to life in a son et lumière* through the voice of the castle caretaker.

The Castle of Miramare, known as the Castello di Miramare, is so beautifully restored and taken care of that one can’t help but feel in one’s heart and soul the tragic love story of Maximillian and Charlotte as one tours throughout the richness of every room.

*son et lumière is from the French literally meaning “sound and light” and refers to a special form of nighttime entertainment usually presented in an outdoor venue of historical significance to tell the story of the place.

Jantiena discovers the heartbreaking love story of the Archduke Maximillian of Austria and Charlotte of Belgium at the Castle of Miramre just outside the beautiful city of Trieste, Italy! 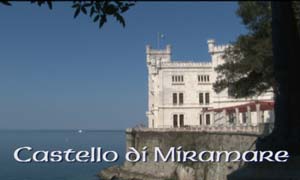 Castle of Miramare overlooking the Gulf of Trieste. 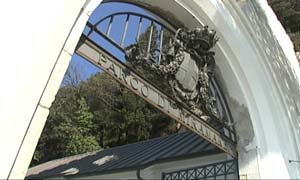 Coat of arms over the gated entrance to the Castle of Miramare. 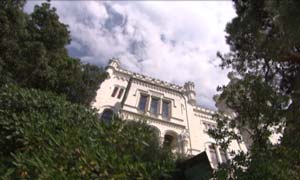 Castle of Miramare looking up from the water. 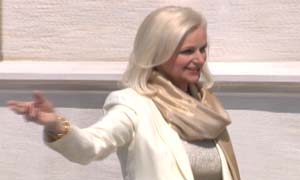 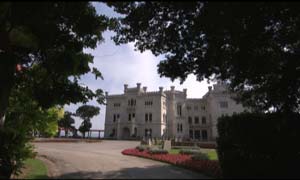 Entrance to the Castle of Miramare. 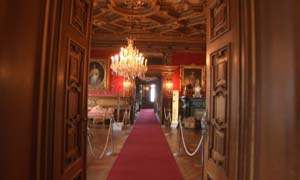 One of the many beautifully restored hallwyas in the Castle of Miramare.