BARON FRANCESCO RICASOLI SHARES WITH JANTIENA THE ESSENCE OF FINE WINE AND THE MAGNIFICENT CASTLE OF BROLIO!

Jantiena Fieyra sits down with Baron Francesco Ricasoli, the 32nd Baron of Brolio, sampling some of the finest wines from all of Tuscany, including the Chianto Classico, a formula which was standardized by the Ricasoli family in 1872.

Cradled within the heart of Tuscany between Florence (Firenze) to the north and Siena to the south lies the fertile rolling hills of the historical lands of Chianti.

And travelling more precisely, one will find themselves in the land of Chianti Classico – a land defined by four communes (municipalities) of Castellina in Chianti, Gaiole in Chianti, Greve in Chianti and Radda in Chianti — covering an area of approximately 100 square miles.

Within Gaiole in Chianti is the Barone Ricasoli, 240 hectares of vineyards surrounding the Castle of Brolio – and it is the oldest winery in all of Italy.

If ever a family name could be considered quintessential to the art of fine wine making, Ricasoli would most certainly suffice.

Although the Ricasoli family has been connected to wine since 1141, it was in 1872 when the Iron Baron Benitto Ricasoli, previously the prime minister of Italy, codified the formula of Chianti in a letter to Professor Cesare Studiati at the University of Pisa where he identified the Sangiovese grape as being the key element.

To this day, the various blends of Chianti and Chianti Classico remain tightly regulated to maintain its integrity and must contain at least 75-100% Sangiovese.

And within the heart of Barone Ricasoli is the Castle of Brolio dating back to the middle ages, often a key venue in the many disputes representing the Florentine bulwark against the fearsome Siena.

So here it was that Jantiena Fieyra toured the incredible vineyards and wine making facilities that produce some of the world’s greatest wines, and it was here that the gracious Baron Francesco Ricasoli took the time to tell the story of Ricasoli and the Castle of Brolio and then sample with Jantiena the flagship wines produced from Barone Ricasoli.

And for the wine connoisseur and novice alike, there is much to be savored and enjoyed from the oldest winery in all of Italy, where as legend has it, the Iron Baron Benitto Ricasoli can still be heard today from within the Castle of Brolio walls, always keeping an eye on all that surrounds it. 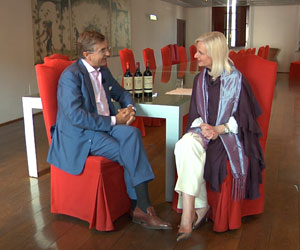 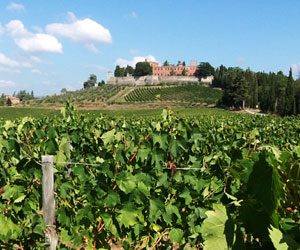 The Castle of Brolio, surrounded by 240 hectares of vineyards, dates to the middle ages and became part of the Ricasoli family in 1411. 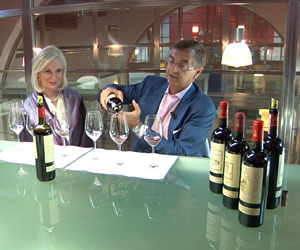 Baron Francesco Ricasoli, the 32nd Baron of Brolio, conducts a fascinating wine tasting with Jantiena Fieyra of the various wines produced from the vineyards of Barone Ricasoli. 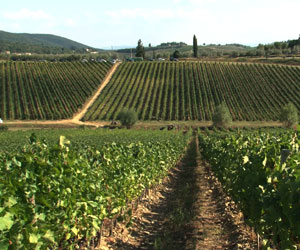 The vineyards of Barone Ricasoli produce the Sangiovese grape, an essential element to the Chianti Classico formula. 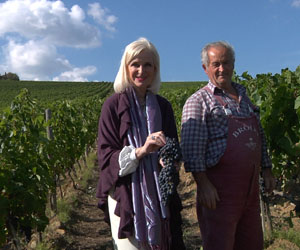 Jantiena visits the Ricasoli vineyards and samples the Sangiovese grapes, a grape variety that is the heart of the traditional Chianti formula. 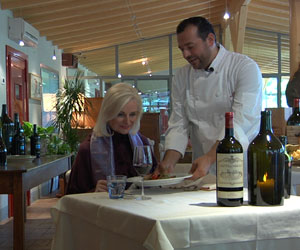 At the Osteria del Castello, the restaurant at the Castle of Brolio, Executive Chef Francesco Sangiacomo serves Jantiena a typical Tuscan dish of pigeon prepared with a lovely Vin Santo sauce. 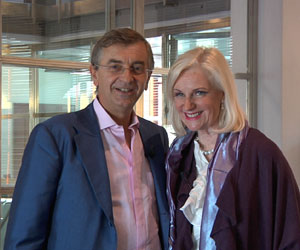 Jantiena Fieyra, host of CarpeDiemTV.com, and the Baron Francesco Ricasoli, the 32nd Baron of Brolio, enjoy a few minutes together after their interview. 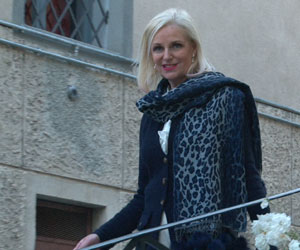 The Barone Ricasoli and the Castle of Brolio are located in the Italian region of Gaiole-in-Chianti within the region of Tuscany.
The landscape is dotted with small communes and rolling hills filled with vineyards. Nearby, Jantiena visited the neighboring municipality of Radda-in-Chianti.