On all race Sundays of the 2016 White Turf, race participants and racing enthusiasts are anticipating an exceptional variety of racing events and new highlights in the tent city on the frozen lake of St. Moritz. Once again, locals, holidaymakers, families with children and members of high society can look forward to unforgettable experiences for all the senses. 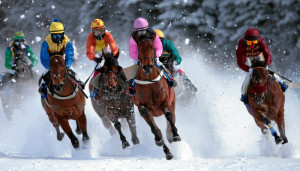 His state of mind could be compared to that of a race horse just before the start: ‘The pulse beats at full speed’, explains White Turf CEO Silvio M. Staub with a smile, as he describes his excited anticipation of the upcoming 2016 race Sundays. No wonder – the new race programme consists of a record number of 20 different races that will guarantee floods of pure adrenaline for the participants and the spectators on the three race Sundays in 30-minute intervals!

Founded in 1907, the traditional international St. Moritz horse races on ice are counted, for good reason, among the official ‘Top Events of Switzerland’. Every year, 35,000 spectators stream onto the frozen lake of St. Moritz on the three race Sundays in order to witness the enthralling scenes and entertaining events against the backdrop of the snow-covered Engadine mountains.

Once again in 2016, with half a million Swiss Francs as prize money, the White Turf will surpass all customary winning sums in Swiss racing sports. With a fabulous prize purse of 111,111 Swiss Francs, the ‘Gübelin – 77th Grand Prix of St. Moritz’, the European Championship on snow, taking place on the third race Sunday, 21st February 2016, occupies an outstanding position. Accordingly, the response from the international equestrian sports’ scene has been excellent, as confirmed by the 25 entry applications received from renowned stables. Just after the official registration finished, a horse from Germany was registered with a late entry. It was purchased at an auction especially for the ‘Gübelin – 77th Grand Prix of St. Moritz’. Currently, 11 horses are registered from Switzerland, 10 from Germany (including the late entry), two from France and three from England.
Registration is now closed.

Hurdle summit – ‘World Snow Hurdle Championship Final’
Besides the equally highly remunerated BMW Trotting races, the ‘World Snow Hurdle Championship Final’ on the second race Sunday, 14th February 2016, will once again be a sporty highlight among the racing events on the frozen lake of St. Moritz, after the successful revival of the hurdle races at last year’s White Turf! The hurdle race, with a prize of 20,000 Swiss Francs, is the race on snow with the highest prize money in the world. It will take place as the final race after two previous hurdle races held on the frozen Obersee (upper lake) in Arosa on 24th and 31st January 2016. The innovative partnership of the two racing organisations offers an additional opportunity for the horses on the starting line in Arosa. Silvio M. Staub is convinced: ‘The spectators in Arosa and in St. Moritz can look forward to a guaranteed high-class field of participants’.

Exclusive Arabian races – important meeting of Amazons
The White Turf 2016 will benefit for the fourth time from an exceptional commitment from the Arabian racing stables. They make the long journey in order to compete for victory in thrilling races with the best thoroughbred Arabians at the ‘H.H. Sheikh Zayed Bin Sultan Al Nahyan Listed Cup’ on the frozen lake of St. Moritz, on the first race Sunday, 7th February 2016. The ‘H.H. Sheikha Fatima Bint Mubarak Ladies World Championship (IFAHR)’ on the third race Sunday, 21st February 2016, will be the most important race, and with a purse of 33,000 Swiss Francs, it is the title race with the highest prize money for ladies in the saddles of noble thoroughbreds at the White Turf. The international great importance of the meeting is demonstrated by the extraordinary performance of Astrid Wullschleger, winner of the 2015 White Turf race. This Swiss lady qualified at the White Turf for participation last autumn at the world championships of Arabian races for ladies in Abu Dhabi, where, in addition, she won brilliantly!

‘Credit Suisse King’s Cup’ – 40-year partnership with Credit Suisse
One of the annual major attractions is the world exclusive ‘Credit Suisse Skikjöring’ races. Again in 2016, daredevil drivers on skis will be pulled over a distance of 2,700m by riderless thoroughbreds galloping across the crunchy ice cover at speeds up to 50km/h. Courageous skills, excellent physical condition and skiing proficiency decide who will gather most points on the three race Sundays, and be designated for one year as ‘King of the Engadine’. This time a special occasion will crown the Skikjöring races. Since 1976, Credit Suisse has supported the White Turf as the main sponsor. Credit Suisse will take the 40th anniversary of this exceptional partnership as an occasion to make a lasting mark. In addition to the prize money, the day’s winner and, of course, the ‘King of the Engadine’ will each be honoured for the first time in 2016 with an anniversary cup, the so-called ‘Credit Suisse King’s Cup’, created especially for the occasion by the young Swiss artist duo ‘Aubry Broquard’ on behalf of Credit Suisse. ‘This anniversary personally fills me with great gratitude and tremendous joy’, emphasizes Silvio M. Staub.

Wide-ranging support by longstanding partners – new international cooperation
The White Turf CEO is pleased and grateful that the main sponsor BMW (Schweiz) AG recently contractually renewed its support for the future. The impetus of these two main sponsors and the commitment of the different racing sponsors as well as the support from the St. Moritz municipality and the tourism organisation Engadine St. Moritz, make it possible to organise the International Horse Races St. Moritz. And last but not least, every year they add innovative highlights to this winter event that has an influence far beyond the Swiss borders. The network of partners with internationally renowned racecourses contributes substantially, too. A new cooperation was launched with the ‘Wrocław Racecourse’ in Poland and the ‘Türkiye Jokey Kulübü’ in Istanbul, and the valuable existing cooperation with the race courses Mauritius and Berlin-Hoppegarten will be continued. Moreover, the ‘Grand Prix White Turf St. Moritz’ already celebrated its 5th anniversary in 2015 in Berlin Hoppegarten! On the third race Sunday, 21st February 2016, the gallop race ‘Grand Prix of the Berlin Hoppegarten racecourse’ on the frozen lake of St. Moritz can be awaited with eager expectation.

These partnerships are not solely based on sports, but also cover cultural events and the promotion of tourism. For instance, Wroclaw as the ‘European Capital of Culture 2016’ will welcome numerous domestic and foreign guests. It is therefore not without reason that the new gallop race of the traditional Polish racecourse on the first race Sunday, 7th February 2016, will carry the name ‘Grand Prix Wrocław European Capital of Culture 2016’.

Funfair from 10.30 a.m. onwards – live music, culinary delights, art and culture as well as shopping and shows
This year especially, it is worthwhile for visitors to arrive on the frozen lake of St. Moritz early, before the races actually start. Not only during the intervals between the thrilling gallop, trotting, hurdle and Skikjöring races, but from 10.30 a.m. onwards, well-loved and new attractions will be provided in the 130,000 square meter event area!

In cooperation with the ‘Festival da Jazz St. Moritz’, live music bands on different stages will provide unique listening pleasure and a dancing mood, as a new and fruitful partnership has been established between the White Turf and this high-calibre festival! Furthermore, local companies and hotels will offer plenty of delicious treats. Whether substantial refreshments or gourmet menus, sweet or salty snacks, regional or exotic specialities, minerals, cocktails or champagne – White Turf visitors can choose as they like from a superb variety. Exhibitions, such as that arranged by the members of the Engadine artist’s association, are waiting to be discovered, or visitors can just enjoy wandering around and taking a look at the White Turf Fan Shop, which has further expanded its product range of high quality clothes and stylish souvenirs. Spectacular shows, too, will generate amazement and offer excellent entertainment.

Families heartily welcome – pony riding and many surprises at the children’s paradise
Moreover, the hotel association Hotellerie Suisse St. Moritz will open a children’s paradise on the frozen lake of St. Moritz, with pony riding for the little ones, face painting and souvenir photographs, painting and other great activities for the kids. There will again be special family admission tickets in order to enable families to enjoy a leisurely visit to the White Turf: two adults with up to three children can occupy seats on stand C for the overall price of 100 Swiss Francs, or one adult with up to three children for the overall price of 50 Swiss Francs. As before, standing places for young people up to the age of 16 are free.

Social commitment – ‘2016 Red Cross Charity Gala’
As a new ‘gold sponsor’ of the ‘2016 Red Cross Charity Gala’, the White Turf will support the international charity projects of the Red Cross by donating valuable auction and tombola prizes for a public sale. In the context of the new partnership, this renowned charity event will take place on the evening of Saturday, 13th February 2016, in the VIP tent of the White Turf, on the frozen lake of St. Moritz.

New ‘Jockey Club St. Moritz’ – home to passionate White Turf fans
More than 200 volunteer helpers, women and men, locals and holidaymakers, prominent personalities from culture, economics and politics as well as owners, trainers and jockeys – they all characterize the exceptional ambiance on the three race Sundays in February. Those who would like to cultivate throughout the year the unique spirit of the White Turf as a social and sporty winter highlight in the illustrious circle of like-minded people, can now become a member of the newly founded ‘Jockey Club St. Moritz’. Club president Dr. Christian Rohner will be pleased to provide detailed information. He can be contacted by email at: rohner@swissberg.com.

By the way, currently 16 fascinating short features on White Turf-TV relate what is happening behind the scene until the race Sundays in February!

During advance booking, special price admission tickets in all the different categories are available online at www.ticketcorner.ch or directly at the tourist information in St. Moritz Dorf.

Credit Suisse – Main sponsor of White Turf
The partnership between White Turf and Credit Suisse has now been in existence for an impressive 40 years. 2016 is therefore a very special year, and one that must be celebrated. For this reason, Credit Suisse has come up with something new and exciting. The overall winner of the spectacular Skikjöring races will not only receive a cash prize and the right to the title of ‘King of the Engadine’. From this year, the winner will also be honoured with an exclusive and very distinctive trophy. The ‘Credit Suisse King’s Cup’ was created by the Swiss artist duo Aubry/Broquard for the 40- year anniversary and gives the individual day’s winners and, of course, the newly crowned king a unique reminder of their achievement. It’s nice to see that, even after 40 years, the partnership between Credit Suisse and White Turf can still set new trends and that the collaboration in place since 1976 remains vibrant and exhilarating.

You will find further information on the numerous sponsorship commitments of Credit Suisse at: https://www.credit- suisse.com/ch/en/about-us/sponsorship.html

BMW (Schweiz) AG – Main sponsor of White Turf
Thanks to its commitment as a principal sponsor, BMW ensures year after year a successful performance on ice and snow at the White Turf in St. Moritz. Equestrian sports are part of the selected sports events that BMW supports with its sponsoring activities. The support of top performances at the highest level matches the ethos of BMW because as a premium automobile manufacturer, the company offers products to its clients that are renowned throughout the world for their quality and efficiency. Equestrian sports and the BMW brand values share the same essential core attributes of dynamic force, aesthetical sense and performance.