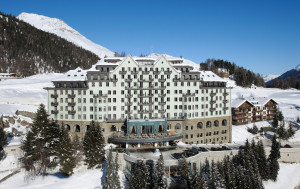 In December 2012, the Restaurant Da Vittorio – St. Moritz opened at the Carlton Hotel St. Moritz under the direction of brothers Enrico and Roberto Cerea (holders of 3 Michelin stars). Their Restaurant ‘Da Vittorio’, based on a heavenly country estate in Brusaporto near Bergamo in Italy, is now one of the top addresses in the haute cuisine world. The exceptional culinary skills of these St. Moritz chefs were initially awarded 17 Gault&Millau points after the first winter season and also impressed testers of the Michelin Guide who awarded the restaurant with a Michelin star after its very first winter season. “Dining at ‘Da Vittorio’ and sampling the cuisine of Enrico and Roberto Cerea is an unforgettable culinary highlight for any gourmet,” according to Director Dominic Bachofen. “We are therefore very pleased that Gault&Millau have recognised our ongoing culinary achievements in our third winter season by awarding us an additional point”.

The ‘Da Vittorio St. Moritz’ has also impressed other testers. The restaurant was selected as one of the best restaurants in Switzerland in the Guide Bleu 2014/2015 and received nine points – the award for exceptional dining culture. And in the newly published ‘Graubünden geht aus’ magazine, the Restaurant Da Vittorio St. Moritz was named third in the top 13 gourmet cuisine list.